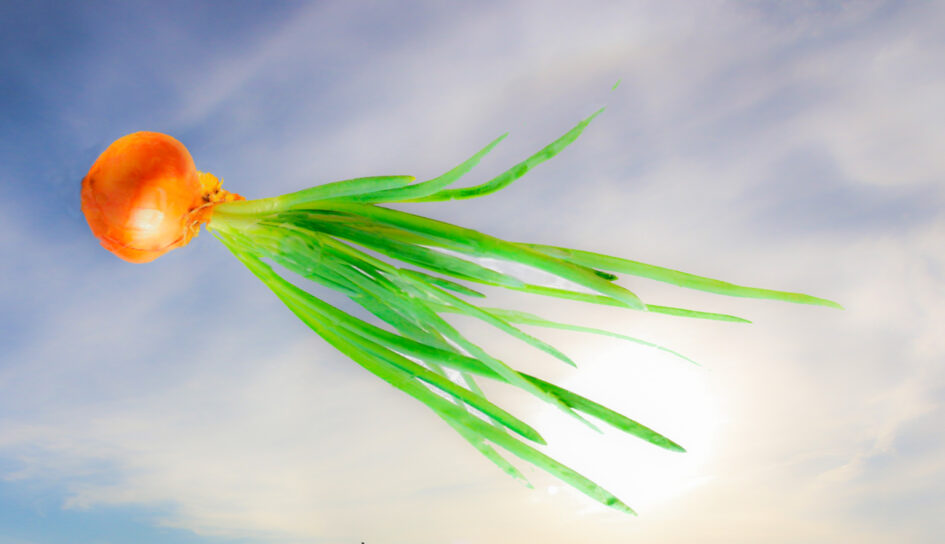 Home from school and my tea shovelled down, I’m off out to call for my mates.

I never know who will be coming out, I go to Paul’s house first, he joins me and we head off to call for the others.

They don’t want to come out, so it’s just us two and we wander about talking, looking for something to do.

After a while we came to the balconies, an area of houses that had flats below houses which have a balcony walkway that looked down over the path below.

The balconies were great for running about on, they were like a high maze around the estate with long ramps leading up and down at different points.

Once up we stood leaning on the railings looking around talking about if the A Team could beat the Incredible Hulk.

Looking down, I spotted a row of large onions growing in one of the gardens, I jumped down into the garden and without a word Paul dropped down to join me.

With two hands I gripped one of the long green stalks that stood a few feet tall and ripped what turned out to be the biggest onion I have seen from the ground roots and all.

I turned to Paul and saw him yanking away at his onion which popped from the ground sending him flying back over onto his backside, getting up he looked at me with a big grin across his face proudly waving his onion.

We climbed over the garden fence, ran back up the ramp onto the balconies swinging our onions leaving a trail of mud behind us.

We stood for a while laughing at how funny it was pulling the onions out and running off with them.

Holding the stalk, I began to swing my onion around my head like an Olympic hammer thrower, we laughed our heads off as I got faster and faster, suddenly the stem broke, the onion went flying and disappeared over some nearby bushes.

I heard a thud and then a shout from the same direction.

A large man came running around the side of the bushes, red faced and shouting he looked up at us.

The man started to point and shout at us.

I think we looked guilty because we were the only ones there and Paul was still holding his massive muddy onion.

I don’t know why we didn’t run but we didn’t, we just stood there frozen and silent waiting.

The man ran up the ramp to where we were stood his face was the colour of beetroot, veins were bulging from the side of his head he was livid.

“Who threw that onion!” he shouted at us.

We stood silent and didn’t move a muscle, I looked at Paul still holding his onion and I could feel the giggles coming on.

Why was this so funny to me when Paul looked terrified?

I always want to laugh when bad things happen, funerals, when I’m in the headmaster’s office I even laughed when a gang beat me up at school and it made them angrier and hit me more, but I kept on laughing.

“That onion hit my wife on the head!” he said in a more serious less shouty voice

That was it, now I’m in hysterics laughing out loud, the man looked like he was going to kill me.

Like a gazelle I turned and ran, Paul let go of his onion, turned, and ran too, he was on my heels before the onion hit the ground.

We didn’t look back, we just kept running, laughing while running is not easy and it slows you down. Turning corners and jumping gardens we kept running until we were out of breath and couldn’t run anymore.

When we stopped, I looked back to see if we were safe, there was no sign of the man I turned to Paul and began to laugh uncontrollably and kept repeating the word “onion”.

Paul didn’t seem to find it as funny as I did as we walked back in the direction of his house to get a drink, I was still just saying onion which eventually made him laugh too.

Ironically at Paul’s house we got a glass of iron bru and a packet of cheese and onion crisps which set me off repeating the word onion again, his Mam asked us what was funny which made us laugh harder and the more we laughed the more I shouted “Onion!”.

Looking back, I now know repeating “onion” was a tic, it was not the first and certainly not the last.

Diary of a Neurodiverse Schoolboy