Another entry in the diary of an 80’s neurodiverse schoolboy

PE is always a guessing game; we never know what we will be doing until we are through the changing room doors even then all we know is if it’s an inside or outside lesson. I’m sure Mr Duckman decides last minute.

Mr Duckman is a tall well-built PE teacher and he is firm but fair, we all like him but wouldn’t mess with him.

His sidekick Mr Fitzroy is a different case altogether, he looks like a small weaselly Sylvester Stallone; I don’t think anyone likes him much and he seems to enjoy punishing us if we mess up.

Lined up outside the changing room, waiting for the door to open, we can see the girls lined up outside their door. Mrs Furst, the girls PE teacher, is always there on time to let them in and they all seem happy to see each other unlike our PE teachers who act like we are a prison detail.

The door clicks open, Mr Fitzroy’s weaselly face appears “get in, hurry up”. Why does he sound upset when he talks to us?

Pushing and shoving our way through into the changing room Mr Duckman appears from his tiny office “outdoor kit on!” he says in his manly voice, which along with his stature overshadows Mr Fitzroy.

Sat on the wooden slatted bench I rifle through my brothers old black Dunlop bag yet another hand me down, the price of having an older brother! Plimsols check, towel check, shorts nope, t shirt nope, I always forgot something, it’s usually the towel. I can get away with no towel I just dry myself with my shorts and t shirt but no shorts or top that means I’ll have to ask to borrow some from the lost property bin.

I approach the office door and speak through the crack “Sir I’ve forgotten my shorts and top Sir”, Mr Fitzroy appears, I was hoping it would be Mr Duckman. “Right you’ll have to wear the leotard” he seems almost delighted to inform me of this with his smug face.

The leotard has been hanging in their office for years, we don’t know where it came from, but I do know it’s had many lads jammed inside of it and it isn’t a good look, we call it the ball crusher.

Putting on a leotard is not an easy task and takes some coordination, the laughing and teasing doesn’t help as it adds to the frustration. Once it is on it feels quite nice, but I’ll keep that to myself.

Leotard on and looking like a skinny 80’s wrestler I jog out and onto the field, Mr Duckson is off with his favourites to get the equipment for the lesson, they appear on the field, footballs in hand. Great, I’m rubbish at football, I’ve never kicked a ball straight ever and I’m rubbish in goal mainly because I daydream.

Lining up to pick teams, the two most popular lads get to pick, this is just humiliation. I know I will be picked somewhere last not because I’m unfit or overweight, it’s because I always get sent off and can’t kick straight and now, I am leotard boy which doesn’t make me more desirable at all.

Finally picked for a side, my captain gives me instructions, I must stay back near the goal and if the other team comes towards the goal, tackle them and get the ball, hack them down if you have to. This translates as, when the enemy attack destroy them and welly the ball in the opposite direction.

Its kick-off and unlike the division one games we watch on the TV, everyone on both sides chase the ball, there’s no defence, midfield or forwards, there’s just a large mob chasing the ball and two goalkeepers.

I see my opportunity for glory, the ball is coming my way with the enemy team, running as fast as I can and kicking with all my strength, not really aiming at anything in particular. I managed not only to take a player to the floor, I managed to remove a large patch of skin from his shins.

There is no whistle blown or man running on with a magic sponge, instead there is Mr Duckmans voice bellowing “Gordon get off the pitch, Jeffrey get up what’s wrong with you, it’s only a scratch”

The side-lines are just an outdoor version of the corridor, which is where I usually end up, mostly because I’m sent off but occasionally when I’ve forged my Mams signature on a PE note.

Looking like a weird reject from swan lake, I bounce about on the side lines in my leotard trying to keep warm and trying to keep my testicles in, at least I don’t have to try to play a game I’m really bad at and I can watch the girls in the distance playing hockey, that looks more like my game, running around with weapons, chasing a little ball and belting it at each other! 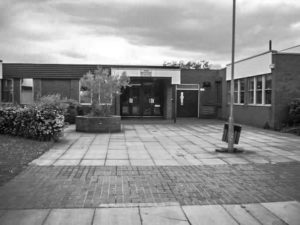