Its Biology with Mr Montego, we have only had him a few times before, he’s a nice teacher; his only downfall is he dresses like Michael Jackson, also he rides a motorbike to school which sounds like a hairdryer.

Other teachers leave us waiting outside the classroom, lined up, not Mr Montego, he allows us to come straight in. We do this as a bustling chattering rabble as we slowly filter in and roughly spread out to our places, the chattering eventually becomes a hum of whispers.

He attempts to gain control of the class “settle down settle down, Diane, Julie, Gordon! Pay attention!”.

He starts the lesson and manages a few sentences before my inner voice takes over. I blurt out “Hey Michael Jackson! moonwalk to your hairdryer”.

I don’t know why I do this, shouting out, making noises, interrupting, touching things and all the things that get me in trouble almost every lesson.

“Out! Out! Gordon Out!” he shouts as he approaches me, then escorts me from the lab.

Outside in the corridor I automatically position myself against the wall, I’m well practiced in being removed from lessons. Mr Montego marches off into the next room towards the head of year office, a minute or so later he returns, not with the Head but a chair which he positions against the wall “sit there and don’t move” he says, then re-enters the class.

This is the friendliest and most caring way I’ve been thrown out of class; I’ve never been given a chair before usually I have a leg aching stand against the wall.

A few moments pass, not even enough time to get into full daydream then I hear a commotion coming from the lab. The door flies open hitting the wall, Diane and Julie come running out followed by an angry looking Mr Montego giving chase. All three-run past, head down the corridor and disappear through the double doors at the end.

Well that was entertaining, and I had a front row seat. A while later Mr Montego returns alone, he doesn’t look directly at me as he passes but gives a side wards glance as he goes back into the lab.

I’m happily rocking back and forth on my chair, in and out of daydreams, then a voice startles me.

It’s Mr Macer my art teacher passing by “stop swinging on that chair Williams you will break your neck!” he says this without breaking his stride and continues his way past.

Why is it that everything we do either breaks your neck or takes an eye out? I have not known anyone who has broken their neck on a chair or anyone that has lost an eye.

Chair rocking is resumed, counting tiles is added to the daydreaming.

Trevor from the year above comes walking by, we know each other from being thrown out of lessons as well as being stood outside the office.

“you thrown out again?” he asks laughing

“Yeah! You know the score, what you up to?” I reply

“Off to the office, been sent to the head for messing about again, catch you later, might see you up there”.

He carries on his way and disappears through the double doors; I wonder if he sees Julie and Diane?

There’s something quite calm and relaxing about the corridor, it’s much better than the stress of the classroom, no noise, no need to control yourself and you get to daydream in peace.

Bell rings rousing me from my half slumber and I nearly fall of my chair, could have broken my neck there. The bell doesn’t signal the end of one lesson so much as it signals the start of another arduous journey to the next and the challenge to control myself. 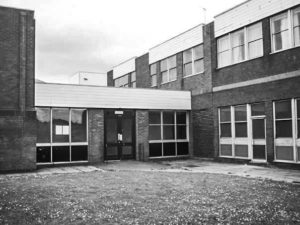